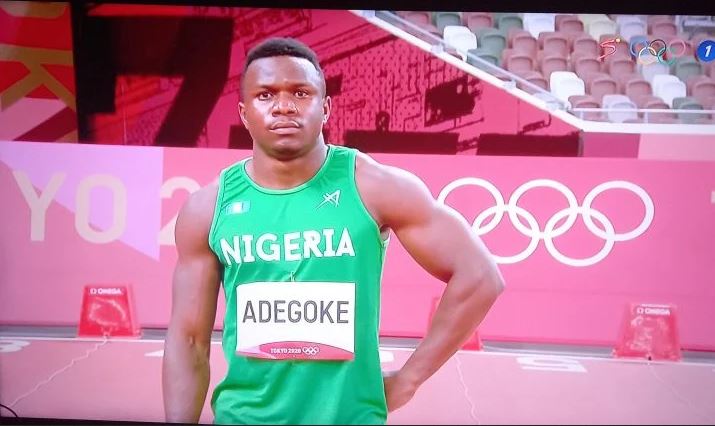 Enoch Adegoke, a Nigerian athlete has qualified for the semi-final in men’s 100m at the Tokyo 2020 Olympics.

He emerged first in his heat after clocking a new personal best of 9.98seconds.

Adegoke is the fastest home-based Nigerian so far this season.

However, Bromell, the fastest in the world this year and favourite to win the Tokyo Olympics men’s 100 metres gold, sneaked through the first-round heats as the fastest loser on Saturday, pouring even more intrigue into Sunday’s final.

The Team USA star posted 9.77 seconds last month and, in the absence of banned world champion Christian Coleman, arrived as the man most likely to regain the blue riband title for the United States for the first time since 2004.

But he got a terrible start in the second heat and was labouring to make ground behind winner Enoch Adegoke of Nigeria (9.98 seconds). Bromell finished a ragged fourth in 10.05 seconds – with only the first three progressing automatically.

Kenya’s Mark Otieno was pulled from the heats hours before the start after a positive doping test. That left Ferdinand Omanyala as the lone contender for Kenya – he also served a 14-month doping ban from 2017 – and he advanced by tying his own national record of 10.01.

The semi-finals and finals both take place on Sunday evening, local time, in Tokyo.