Harry hits bar at $1,300-a-night NYC hotel for second night in a row but Meghan nowhere to be seen 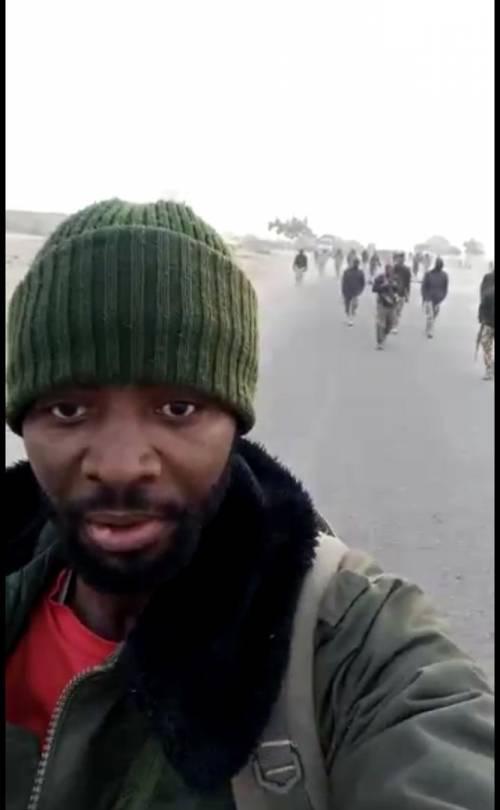 According to an exclusive report by SaharaReporters, Mrs. Ngozi Ojeh, the wife of Ebenezer Ojeh, the police officer arrested for alleged possession of illegal weapons in Borno State, has dismissed claims that her husband is a fake policeman.

It had been reported last week that troops of the Nigerian Army’s operation Hadin Kai arrested a supposedly fake policeman who was in possession of illegal ammunition.

A military source had alleged that Ojeh was intercepted at a checkpoint by troops from the 154 Task Force battalion, Ngamdu, along Maiduguri-Damaturu Highway on Sunday.

An army officer, DY Chiwar, who is the commander of the battalion, was said to have ordered Ojeh’s arrest, after noticing suspicious movements.

When interrogated by the troops, the suspect was said to have claimed to be a member of the police special weapons tactical team (SWAT) from the mobile police force, 19 unit, Rivers State.

Speaking with SaharaReporters, the wife, Ngozi, corroborated Ebenezer’s account stating that her husband was truly an officer in Rivers State but had been deployed on special duties to Borno State since January 2021.

According to her, the officer was returning to his family in Edo after several months when he was ‘nabbed’ by the soldiers who suspected him to be a fake officer.

She said, “Though I’m in no position to give a verdict on the authenticity of the ammunition and grenade allegedly seen in his bag, I can confidently debunk the claim made by the army squad at the checkpoint along Maiduguri/Damaturu Expressway, that he’s not a genuine policeman.

“I would want to correct the impression that he’s a suspected fake policeman. Prior to his arrest, he had been complaining to me that some of his colleagues had animosity towards him, for no just reason. This makes me feel that he could have been set up with these items (ammunition and the grenade) placed in his bag unknowingly to him.

“Since his arrest, neither I nor his parents have been able to reach him. And since it’s already in the media that he’s a fake policeman, without any effort to set the records straight, I fear he would be treated as such.

“I have not set my eyes on my husband since January which was when he left Port-Harcourt to Maiduguri in Borno State on special duty. He was returning home to me and his children when he was arrested. He was coming to us in Edo State.

“He should be handed over to the police and granted access to communicate with his family and stop being treated like a common criminal. He has suffered a lot already just for him to come home and rest.

“I don’t know what they have done to him, I don’t know if my husband is still alive or not. He has not killed anyone, he is a suspect. He should be granted access to his family at least. To even feed is a problem for us.”